Bring Me The Horizon show us a new side with their fifth album ‘That’s The Spirit’, their usual metalcore sound takes the backseat and the album is driven by a more alternative-pop sound. The five-piece rock band formed back in 2003 and since have changed their sound with nearly every album. There’s such a range of sounds on the album, yet still staying within the broad genre of rock, and I absolutely love it. I’ve never been much of a fan of Bring Me The Horizon but this album has changed that.

I first heard ‘True Friends’ on Beats 1 when Pete Wentz was standing in for Zane Low, the song really stood out to me and I loved everything about it. I was singing along and immediately searched for the single, that’s when I got really excited for BMTH’s newest album and it didn’t disappoint.

I wouldn’t hold my breath if I was you

Cause’ I’ll forget but I’ll never forgive you

True friends stab you in the front

The chorus was in my head all day and I was singing it at work; it puts a smile on my face and I think it’s more true than we would like to admit.

Lead singer Ollie Sykes cited alternative rock bands like Panic! At The Disco and Radiohead as influences for this album. We definitely get a new sound that’s more inline with that genre, the song ‘Follow You’ brings The Neighbourhood to mind and the album itself has been compared to both Muse and Linkin Park. It’s a sound that really works for the band, it sounds as if they’ve been making this style of music forever and I’ve been listening to this album on repeat.

Another of my favourites from this album is ‘Throne’ it has those big moments that BMTH pull off brilliantly combined beautifully with slightly slower moments. This song really captivates a listener, it has a very cinematic feel to it and this helps give the album a real journey feeling. The video also is able to capture the energy of the song with a medieval, game-of-thrones-esque theme.

‘Blasphemy’ has a much grittier sound, the strong guitar sound and heavy beat will have you bouncing along. Like many of the songs on this album it won’t be along until you’re singing along, you’ll find yourself humming the tune soon enough.

Even if you’re not a big fan of Bring Me The Horizon or the heavier rock sound I would recommend giving this album a listen – it is not an album you want to miss out on. 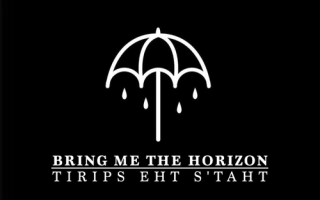 One thought on “That’s The Spirit – Bring Me The Horizon”