This live review is slightly different to the others featured on this site; mainly as we missed many of the bands due to coach times. This gig, headlined by Faux, at The Joiners in Southampton certainly began brilliantly. Death By Shotgun kicked off the night, followed by a band called Polary both of whom captivated the audience at one of my all-time favourite venues.

I’ve seen Death By Shotgun once before quite unexpectedly and fell in love with them. Their slightly awkward honesty is entirely endearing and creates a beautiful, raw energy on stage that is impossible to look away from. During their set, they clearly won over much of the audience who were bobbing away and mumbling along with them. Following a fabulous interview which will be live on the site within the next week, I’ve grown even more attached to this wonderful band. Their new music will surely blow your socks off and I can’t wait to catch them live again. If you ever get a chance to see Death By Shotgun live – take it! 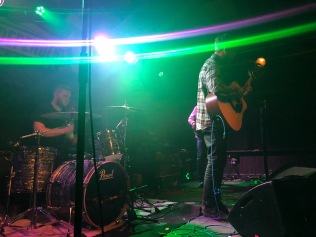 After watching Polary’s soundcheck, I was really excited to see them take to the stage. Their music is a wonderful mix of pop, rock and electronic; reminding me of bands like Twenty One Pilots and Broadside. It only took one chorus before singing along to their tracks which are stuck in my head to this day. Disappointingly, I had to leave two songs into their set and wasn’t able to buy any merch from them. Nonetheless, I am anxiously awaiting more from these three lads.

These sets were brilliant and I’m sure Faux and Scarecrow Boat were similarly insane. Be sure to check all of these bands out – buy their merch and listen to their songs. It’s impossible not to fall in love with them.